With all the updates in today’s vehicles, aftermarket car stereos and head units are no longer as in demand today as they were before. Car manufacturers are putting in all the stops when it comes to their factory stereos. A lot of the infotainment systems of newer vehicles today are loaded with features that make aftermarket head units moot. But, even still, there’s still a market for aftermarket head units - even the high-end ones!

The Pioneer AVIC W8500NEX is a prime example. This is one of Pioneer’s top tier models. This flagship-level aftermarket head unit that more than warrants an upgrade – even over the newer car vehicle models!

In addition to Android Audio and Apple CarPlay, the AVIC-W8500NEX also supports both back-up and front-facing cameras, with technologies such as WebLink, as well as screen-mirroring and, finally, compatibility with high-resolution audio files such as .FLAC format.

The Pioneer AVIC-W8500NEX even has turn-by-turn navigation complete with traffic information in supported areas, compatibility with selected apps, HD radio support, and Siri Eyes-Free technology on top of Apple CarPlay.

What Makes the Pioneer AVIC W8500NEX So Good?

Wired and Wireless Use Support

Befitting of a flagship product, the AVIC W8500NEX is one of the few head units on the market that offers true wireless use support.

This means that you can connect your iPhone or Android Phone with this head unit over a wireless connection or a wired USB connection.

This makes connecting to your head unit easier than ever before. 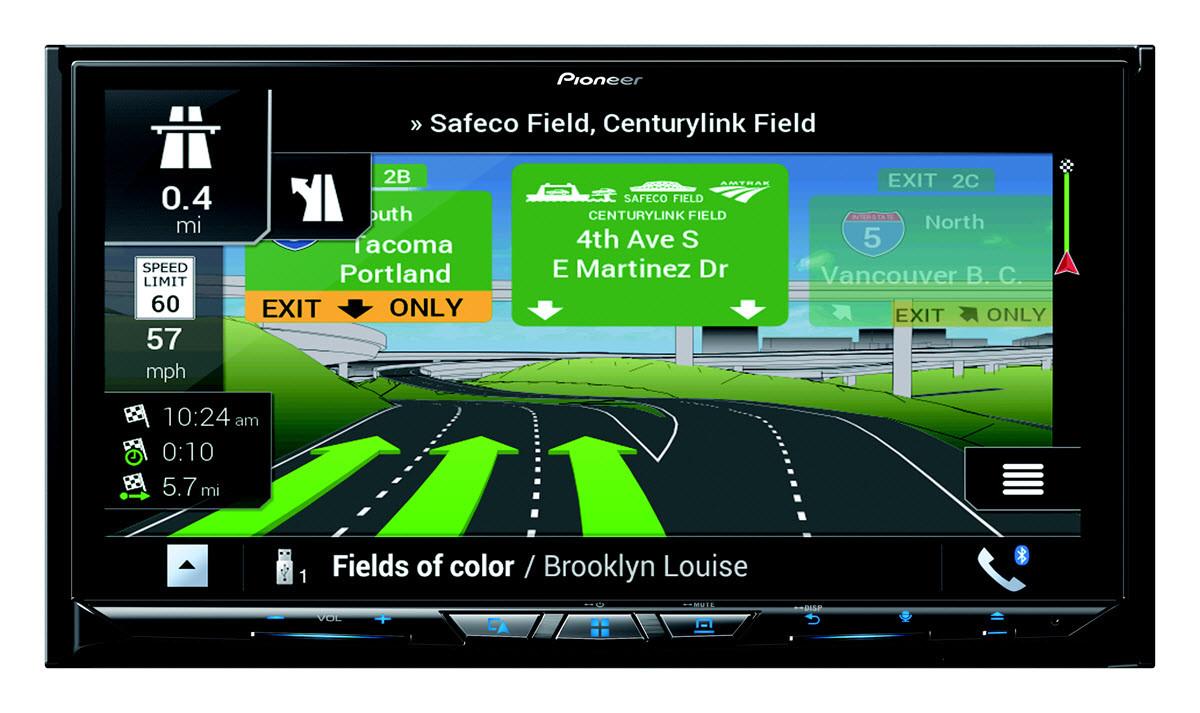 At 6.9 inches, the screen of the AVIC-W8500NEX isn’t exactly that large. It’s the same size as other larger smartphones today. But, what it lacks in real estate, it more than makes up for in design and customizability, as well as seamless touchscreen performance.

For starters, you can customize the main menu. You can choose from five different display colors, as well as 13 splash screens and backgrounds. It also comes with side-by-side layout customization, as well as a larger album artwork display, and play/pause skip operation to make it easier to choose music while on the go.

Music That Enthusiasts Will Love

Because of its price point, Pioneer expected the AVIC-W8500NEX to draw in the enthusiast crowd.

To that end, they made sure that this head unit is up to the challenge.

The Pioneer AVIC-W8500NEX lets enthusiasts and average users alike tweak the music as much as they want. It has features such as Auto EQ and Time Alignment, a 13-Band Graphic Equalizer, as well as a built-in high and low pass crossover.

The best part? You can even play high-resolution audio on the AVIC-W8500NEX and not miss a beat.

This head unit supports high-resolution FLAC audio files with up to 192kHz/24 bit, which means that it can play your music just as well as it would right out of the CD.

The Pioneer AVIC W8500NEX takes navigation to another level. No longer will you be needing apps. Because, on its own, the AVIC-W8500NEX lets you get to where you want to go, as it comes with a complete database of places, including turn-by-turn directions to restaurants and ATM machines, as well as so much more.

With detailed traffic and route guidance information to boot, you won’t just get to where you want to go thanks to the AVIC W8500NEX. You’ll also be getting there safely.

You won’t need to worry about choosing between a rear-facing camera and a front-facing camera with the Pioneer AVIC W8500NEX. This is because it supports both. Because of it, you’ll have the peace of mind knowing that you have cameras assisting you with visibility in the front and in the rear, making parking so much more convenient.

The AVIC-W8500NEX lives up to its manufacturer’s name. It truly is a pioneer.

With that said, the AVIC-W8500NEX comes with a price. Literally.

So long as you’re willing to pay the premium, this high-end aftermarket head unit is as good as it gets.