For quite some time now, Auto manufacturers have been significantly improving the quality of their audio dashboard. It seems that technology just keeps getting better and better with these car stereo receiver. Not only do they allow you to integrate your phone right onto your dashboard, they have various capabilities like GPS and handsfree options making your driving experience so much more enjoyable.

With the introduction of Apple CarPlay and Android Auto, it’s now possible to enjoy the experience you can get from your smartphone straight from your car stereo. The introduction of these two platforms caused the car stereo market to integrate them into their devices so you no longer have to buy a new car just to have them.

However, you still need a vehicle that comes with a double-DIN radio as well as a large touchscreen for the digital interface. If you have a single-DIN radio, you might have run out of luck. These are generally much smaller and half the size of the Double DIN stereo, limiting you to a much smaller receiver.

This is where the Pioneer AVH 3400NEX and Pioneer AVH 3300NEX comes in. Both stereo receivers are Single DIN Head Units that offer the same multimedia features that you would get from a Double DIN Touchscreen Stereo Receiver. They both offer superb quality for a car multimedia player with the aim of replicating the experience and convenience offered by a smartphone.

In this article, we’re going to do a side-by-side comparison between the Pioneer AVH 3400NEX vs AVH 3300NEX. Our goal is to properly compare the two and point out each of their features, specs, highlights, pros and cons, similarities, and differences to see which one's better for you!

Apart from fitting into a Single-DIN radio, the AVH 3400NEX also offers excellent smartphone experience throughout the integration of both Apple CarPlay and Android Auto. Apart from that, it comes with a 7-inch Clear Resistive touchscreen which can be highly customized based on your preferences.

For most single-DIN stereos, the AVH 3400NEX is designed to offer smartphone-driven users a solution for their single-DIN setup. The unit is fully compatible with all Android phones as well as iPhones 5 and above. It also includes a microphone to allow hands-free calling as well as a remote control and voice commands.

Despite measuring only 7 inches, the display offered by the AVH 3400NEX is fairly sharp at an 800 x 480 resolution. There are a variety of options to choose from including automatic dimming, five display colors, and more.

Apart from its highly responsive touchscreen, you also have access to several smartphone features including Siri Eyes and Google Now. It also features Pioneer’s very AppRadio Mode + that will provide you control of various compatible apps straight from the unit’s touchscreen.

Finally, the AVH3400NEX comes with two auxiliary video inputs located in its rear panel, a rear video monitor input, and a detachable faceplate to offer protection from theft. You can fully customize the interface, and you even have various display options to choose from. 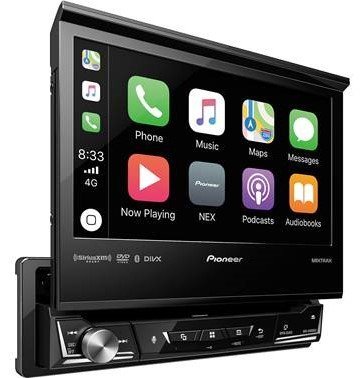 As for the Pioneer AVH3300NEX, it’s basically the older version of the 3400NEX. Likewise, it can fit into a single-DIN radio opening. Since it measures 7 inches, you want to make sure that there’s enough room for it to slide in and out without getting in the way of your car controls. While it comes with an angle adjustment function, you still need to determine the space you’re working without even before you buy and install the unit.

It includes a microphone for hands-free calling and voice commands. It also comes with a physical remote control and a detachable faceplate for theft protection. It has a sharp resolution at 800 x 480 and comes in 5 different color options for the display.

Though the touchscreen is fairly responsive (there might be some instances of lagging), you can also use hard buttons that are located in the unit to access certain functions. However, do take note that these buttons are quite small.

Aside from the integration of Apple CarPlay and Android Auto, the AVH 3300NEX also comes with the AppRadio Mode+ so you can freely control a variety of smartphone apps. Meanwhile, if you’re planning to use individual apps, you can also use the controls featured by the 3300NEX for Apple Music, Spotify, and Pandora.

The AVH 3300NEX features a bright and sharp VGA display which can play DVDs as well as other video content in clear detail. However, you have to park in a safe parking spot first to ensure you and your passenger’s safety. You also have the option to send video from the receiver to a rear-seat screen.

Meanwhile, if you find yourself traveling on the road at all times, you might want to use the optional SiriusXM tuner so you can listen to a variety of satellite radio channels. Regardless of your taste in music, you can find lots of channels that will play your favorite songs alongside new and old ones. 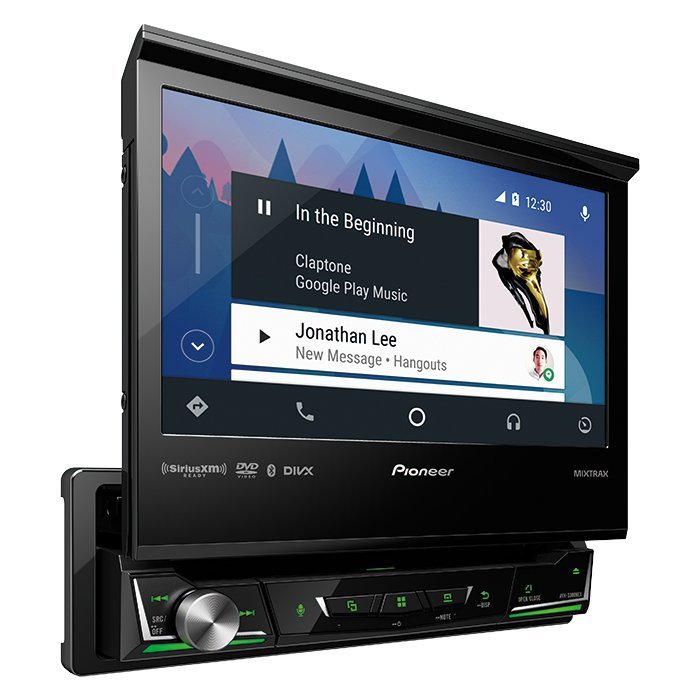 Now that we’ve talked about the descriptions, specs, and highlights of both the Pioneer AVH 3400NEX and Pioneer AVH 330NEX, let’s now move onto the comparison.

First, let’s talk about how the two products are similar to each other:

Both the AVH 3300NEX and AVH 3400NEX sports a 7-inch resistive touchscreen which offers crystal-clear VGA display at an 800 x 480 resolution. They both offer five different color options to choose from as well as automatic dimming function and 13 different splash screen choices.

Despite being a resistive touchscreen, both of them are quite responsive. You can even use the volume/source knob as well as a number of hard buttons to access several functions on the stereo.

Both units are compatible with Apple CarPlay and Android Auto. With Apple CarPlay, all you have to do is plug in your iPhone to gain access to an iOS-style interface. You will then be able to access your files including messages, music, and more.

For the Android Auto, you can access your apps and other files in an organized and simple interface. Due to this, you’ll have an easier time navigating through the menu.

Apart from the CarPlay and Android Auto, both Pioneer AVH 3400NEX and AVH 3300NEX have Pioneer’s very own AppRadio Mode+ which provides you with added flexibility when your iPhone is plugged in. as such, you can access compatible apps such as Waze and more.

If you like using streaming services to listen to a variety of music, then you’ll be glad to know that both units allow you to control both your Pandora and Spotify accounts with ease. All you have to do is connect your iPhone or Android phone via Bluetooth.

Both units also offer the same audio/video experience. They can play and display DVDs as well as other video content in crisp and clear detail provided that you’re parked. You can also send a video to the rear-seat screen from your iPod or iPhone using optional cables.

However, if you use the AppRadio Mode+, you will experience issues when using iOS 11. As of now, Pioneer is still working on an update to fix that. That said, you won’t have any issue when you use iOS 10.

The AVH 3400NEX and 3300NEX both feature advanced EQ settings that allow you to tune the sound equalization based on your preferences. There are even presets available including crossover controls, bass boost, and a delay function.

Now that we’re done talking about the various similarities between the Pioneer AVH 3400NEX and Pioneer AVH 330NEX, let’s now talk about their major difference which is:

After scouring the internet for information, mainly from the manufacturer’s website itself, we weren’t able to find any noticeable difference between the two single-DIN head units. So far, the only difference between them lies in their respective prices. Though there aren't significant differences, you can argue that the 3400NEX is a tad bit better just because its simply the newer upgrade.

Based on our findings, we can say that the two products are nearly identical to each other in terms of specs. Despite the 3400NEX being the newer version, it doesn’t offer anything new nor does it have any notable improvement than the previous 3300NEX version. Perhaps it has something to do with the quality or performance of the software. However, since it’s not really disclosed, we can’t really tell for certain.

In terms of tech, it might simply be the difference between an iPhone 6 vs an iPhone 6s. As far as functionality, not a whole lot of changes there. So if you already have the 3300NEX, there really wouldn't be much of a need to upgrade to the next version up as they are pretty much the same product.

Despite that, both Pioneer head units are surely good choices for a single-DIN head unit, though some would recommend getting the newer 3400NEX version since it’s the newer version. For Single DIN Head Units, these two are some of the best ones in the market - you can't go wrong with either choice! 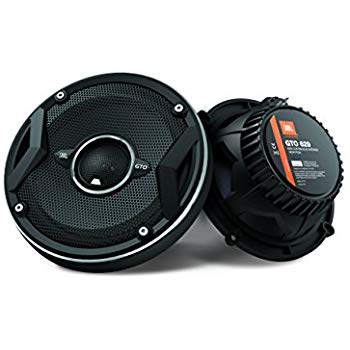 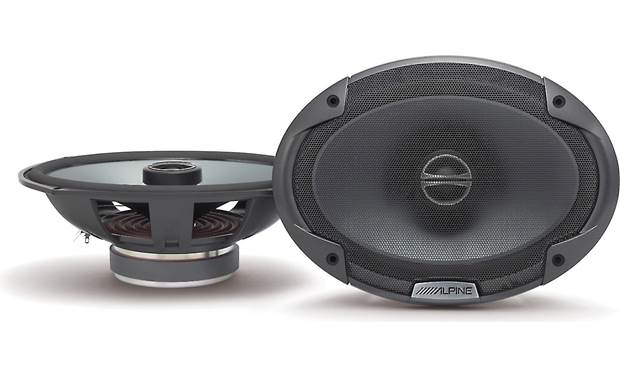 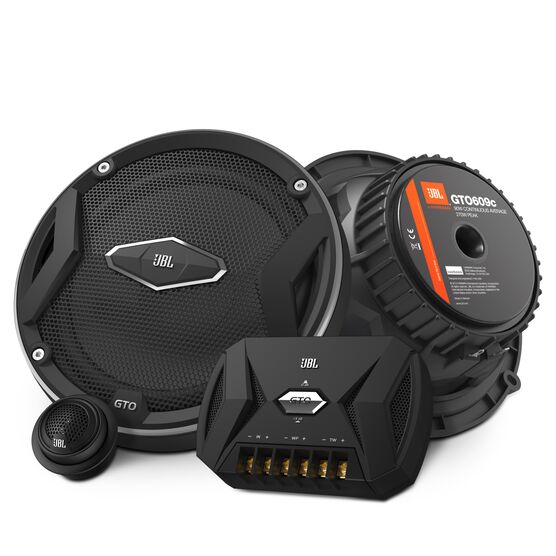