The head unit - also known as the receiver, car stereo, or deck - is both the heart and the brain of your car audio system and the component you'll directly interact with most often from behind the wheel.

Nowadays, aftermarket car stereos come with so many bells, whistles, and proprietary technologies that trying to pick one can be a daunting task. And when you choose a head unit, you're locking in your available features, audio sources, and the expandability of the rest of your car audio system.

Searching for the best single din head unit is a bewildering task. There are tons and tons of single din car stereos out there. And when you have that many car stereos, there's an awful lot of rubbish you need to wade through to find what you're looking for.

Luckily for you, we are here to help. We've done the heavy lifting for you. We've done the research so you don't have to, and we've compiled a definitive list of the best single din car stereos on the market.

This is not by any means a comprehensive list. There’ are tons and tons of great single DIN head units out there. However, we did want to give you a few good options.

The head units we listed here represent different price points, types and designs. With any luck, you’ll find something that meets your needs and fist within your budget.

If we missed a single DIN car stereo you like, let us know in the comments.

Pioneer is one of the best car stereo brands out there. They are one of the most authoritative brands in the audio industry.

They've been around for a very long time and they have mastered the art of manufacturing great product for a very reasonable price.

Pioneer offers a wide range of head units of different types, sizes, and shapes. The DEH-X9600BHS is one of the best single DIN head unit that Pioneer has to offer.

It features a modern look and it comes with all the convenient features you'd want in a modern single DIN car stereo such as Bluetooth® for hands-free calling and audio streaming, an HD Radio™ tuner for improved AM/FM, Pandora® Internet radio control, and dual USB inputs. 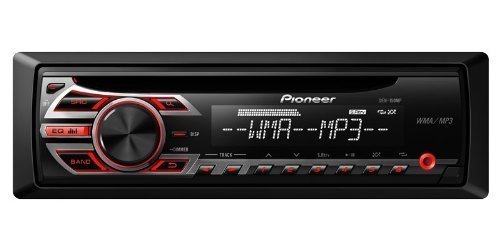 The DEH-X9600BHS is SiriusXM ready. So, you can simply connect the SiriusXM tuner to the dedicated port on the rear of the receiver and enjoy commercial-free music, all your favorite sports, exclusive talk and entertainment, comedy, news, traffic, weather, and more!

The DEH-X9600BHS is equipped with a built-in MOSFET amplifier capable of outputting 14 watts RMS per channel. It's fitted with various soundshaping controls including including a 5-band equalizer that lets you fine-tune the sound to your taste, and Pioneer's advanced sound retriever (ASR) for improved sound quality from compressed music files.

Additionally, if you're a serious car audio enthusiast and you want to build a fully customized car sound system, you'll appreciate the three sets of high-voltage pre-amp outputs for adding external amps.

The DEH-X9600BHS features a bright, full-dot display enhanced by MIXTRAX, which is Pioneer's exclusive technology that creates a non-stop mix of your music library complete with a range of DJ-inspired effects and transitions between songs.

Kenwood is another established car stereo brand. They've been around for a very long time. They produce and market a wide range of car audio equipment including speakers, amplifiers, and all types of head units. 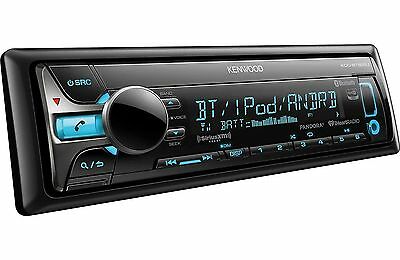 It sports various smartphone-friendly features such as Bluetooth for hands-free calling and audio streaming, built-in iPod, iPhone, and iPad control, as well as Pandora and iHeartRadio Internet radio control with iPhone and Android.

While many single DIN head units out there can only be paired to a single smartphone, the KDC-BT565U features dual phone connection which enables simultaneous pairing of two phones.

Dual phone connection is a convenient feature especially if you share your car with someone else, as it allows you to switch between two phones quickly.

The KDC-BT565U is fitted with a built-in MOSFET amplifier rated for 22 watts RMS per channel. It has 13-band graphic equalizer with Drive EQ, as well as a bass boost and loudness controls, not to mention subwoofer low-pass filter, phase, and level controls.

As for expandability, the KDC-BT565U is SiriusXM ready. It features three pairs of RCA pre-amp outputs, so you can connect additional external amps to enhance and add more punch to your sound.

It also comes with a front-panel auxiliary input and USB port with sliding covers.

Additionally, the KDC-BT565U is equipped with a detachable single-line TDF (Theft Deterrent Faceplate) display with variable-color illumination, so you can customize the receiver's single-line display to blend with your car's dashboard.

The AVH-X7700BT is one of the best single DIN head unit in its category. It features a motorized flip-out 7 inch touch screen monitor that's designed to fit into a single-DIN (2" tall) dash opening.

This user-friendly touch screen allows for quick and easy access to all of your favorite entertainment options and receiver's functionalities. 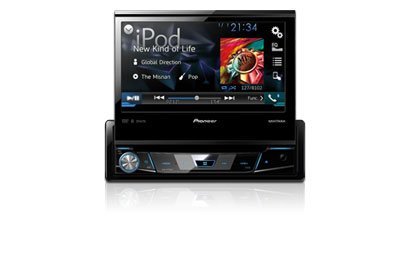 You can adjust the screen's viewing angle for a comfortable view in your car. You can also customize the AVH-X7700BT's appearance by choosing from five display colors and 112 key panel illumination options.

The AVH-X7700BT is equipped with built-in Bluetooth which offers the convenience of hands-free calling and wireless music streaming from Bluetooth enabled devices.

This head unit also features Siri Eyes Free technology so you can keep your hands on the wheel and use your voice to place calls, select music, add reminders or even compose and listen to text messages.

The AVH-X7700BT is dual-zone capable. It can compartmentalizes the sound experience within your car. So, for example while the parents are listening to their favorite music in the front seats, the kids in the back seats can enjoy watching their favorite movies or cartoons.

And, of course, you can plug in a rear-view camera to play it safe in crowded parking lots.

If I had to pick some criticisms for the AVH-X7700BT, it would be just the price. Something this good is naturally expensive. However, despite its fairly steep price tag, the AVH-X7700BT is a great single DIN car stereo that's worth every penny.

While most single din car stereos out there are priced at over $100, easily, the DEH-150MP can get the job done for around $50.

7 Things To Look For When Choosing A Head Unit

So what should you look for when choosing a new head unit for your car? Well, in order to make an informed buying decision, here are the most important things to take into account.

The main purpose of the in-dash car stereo is to output audio signals to your car's speakers via its internal amplifier. The amount of wattage a car stereo can put out is one of the most important factors to be taken into consideration.

So, if you have power-hungry speakers that can handle a great amount of power, then look for a receiver with a solid internal amplifier.

When you're shopping for a new car stereo, you'll notice that car stereo manufacturers like to brag about their head unit's peak power handling. Don't let that deceive you.

The most important factor in power handling is RMS, and not peak rating. RMS rating realistically measures how much wattage a receiver is capable of outputting on continuous basis and not just for short period of time.

The power rating will also include a number of channels that the amp built into the receiver is capable of outputting (usually four: front right and left, and rear right and left) and will be presented something like "25Wx4 RMS" or "52Wx4 max."

Generally speaking, more RMS wattage is good. It gives you more headroom for turning the volume up before reaching the limits of the amp's ability, where distortion kicks in.

However, more watts don't necessarily mean better sound; Sound quality is determined by various factors such as the quality of your audio source, digital signal processing, equalization, the digital-analog converter, and most importantly the speakers.

I find that for most factory-installed and reasonably priced aftermarket speakers will perform quite well with about 25 watts RMS - say 50 watts max - per channel, but you'll also want to make sure that your amp's output doesn't exceed the amount of power your speakers can handle.

The audio sources that you most often use are another element that you should consider when you're shopping for a head unit.

Do you still have and play CDs? Or you've ditched them in favor of digital media? Even if you still keep a book of CDs in your car's glove box, odds are good that one day you'll want to plug your phone or mp3 or mp4 player up to your car, so make sure that your new receiver at the very least includes a USB port for MP3, AAC, or WMA playback from flash storage devices and a 3.5mm analog auxiliary input for universal connectivity.

The odds are good you're reading this guide on your smartphone, or at the very least there's smartphone in your pocket that you'll want your new car head unit to play nice with.

The broad advice is to look for the "Made for iPhone" badge to ensure that the USB port on your new stereo supports full speed access to your iDevice's media.

"Made for iPhone" means that a car receiver has been designed to connect specifically to iPhone and has been certified by the manufacturer to meet Apple's performance standards.

Additionally, if you're an iPhone user - particularly iPhone 5S, 5C, or iPads that use the new Apple's lightning connector - you'll also want to make sure the receiver you're considering uses a plain-vanilla USB port and not an older 30-pin connector.

Heavy users of streaming apps like Pandora or iHeart Radio should look for receivers that support those apps.

Whether you're a serious audiophile or an audio enthusiast, you'll want to have as much control over the sound as possible.

So, look for a car stereo with an EQ that offers as many bands as possible. You'll also want to consider a parametric EQ for the greater flexibility in fine tuning the entire range of frequency output.

Whether you're a bass head who's a big fan of the boomy, bone-rattling bass or you're just wanting to add decent bass to your car stereo system, a dedicated subwoofer output is a must-have.

Many head units out there with a sub output also come with a subwoofer level control, which lets you increase or decrease bass volume depending on the song or the type of music you're listening to. This is incredibly convenient.

A dedicated sub output with a low-pass filter gives you even greater control over the range of frequencies that flow to the subwoofer, so you can truly fine tune the bass from the driver's seat.

An easy to read display is a must. You don't want to squint to see the screen. Furthermore, you don't want a display that washes out in sunlight. That's a huge pain in the ass.

In order to avoid all these issues, opt for a car stereo with two line high-contrast display. These receivers are a bit expensive, but they're much easier to read when you glance down at them.

It all boils down to personal preference when it comes to the look and feel of a car stereo. For example, some people prefer a rotary knob for volume control while others push buttons.

Some people like catchy, multicolor display with moving graphics and light shows while others like to keep things as simple as possible.

And as a matter of fact, pricey head units typically feature an appealing and eye-catching design. Additionally, you have to shell out some serious dough for the type of flashy bells and whistles that really make a head unit stand out.