Choosing the best marine stereo for your boat can be a challenge. The sheer number of marine receivers out there is enough to make your mind spin.

To help you make an informed buying decision when you're shopping for a new receiver for your boat, we've put together this resource – a one-stop-shop, all inclusive comprehensive guide on how to choose the best marine stereo.

Nowadays there are thousands of selections you can choose from, but not all of them are suitable for marine use. Here are the best marine stereos for those of you looking to boost your system on your boat before you set sail!

The KMR-D765BT is one of the best marine single din stereo that Kenwood has to offer. It's the newest, most advanced marine stereos in the Kenwood's arsenal.

This marine CD receiver packs in a ton of great features including Bluetooth connectivity for hand-free calling and wireless music streaming, two USB inputs (front and rear) to access your playlists, front AUX input, three sets of preamps as well as a wired remote connection. 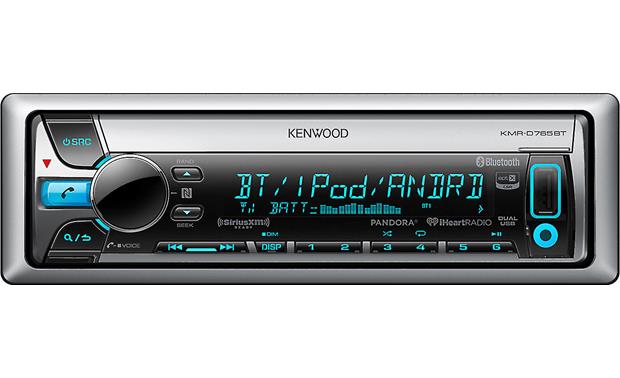 This model has great audio, tuner, Bluetooth, and media playback features. Whether you’re using Android or Apple, your day on the water will be made more fun with this topnotch marine CD receiver. You can use the Bluetooth feature or just plug your player into one of your device’s USB inputs in order to access your playlist. This is a durable receiver that can handle the rugged marine environment.

Additionally, the Kenwood KMR-D765BT also supports internet radio - Pandora  and iHeart Radio. And, if you're a satellite radio fan, you can add a SiriusXM tuner and you won't miss any of your favorite music, sports, and talk, even when you're miles and miles offshore.

As with most high-end Kenwood stereos, the KMR-D765BT is very well-engineered and well-conceived. It has a large volume knob and its buttons are intuitively placed for eacy access and to reduce distractions. This marine receiver features a big, variable-color 1.5-line LCD display that will makes it easy for you to see song titles and channel information, even in bright daylight or when you're blasting through choppy water.

As for audio features, the KMR-D765BT is fitted with a built-in 13-band Drive EQ that you can use to fine tune the sound and compensate for exterior noise. It has a built-in MOSFET amplifier that can put out 22 watts RMS to each of its four channels.

The JBL PRV-175 is a digital media receiver, what this means is that it doesn't have a built-in MP3 player. So, this receiver would be a great investment for anyone who no longer uses CDs.

This marine digital media receiver features built-in Bluetooth® connectivity so you can stream music from any Bluetooth enabled device. It also has a rear aux input for your portable music player, as well as a rear USB port in which you can plug in your smartphone or a thumb drive. 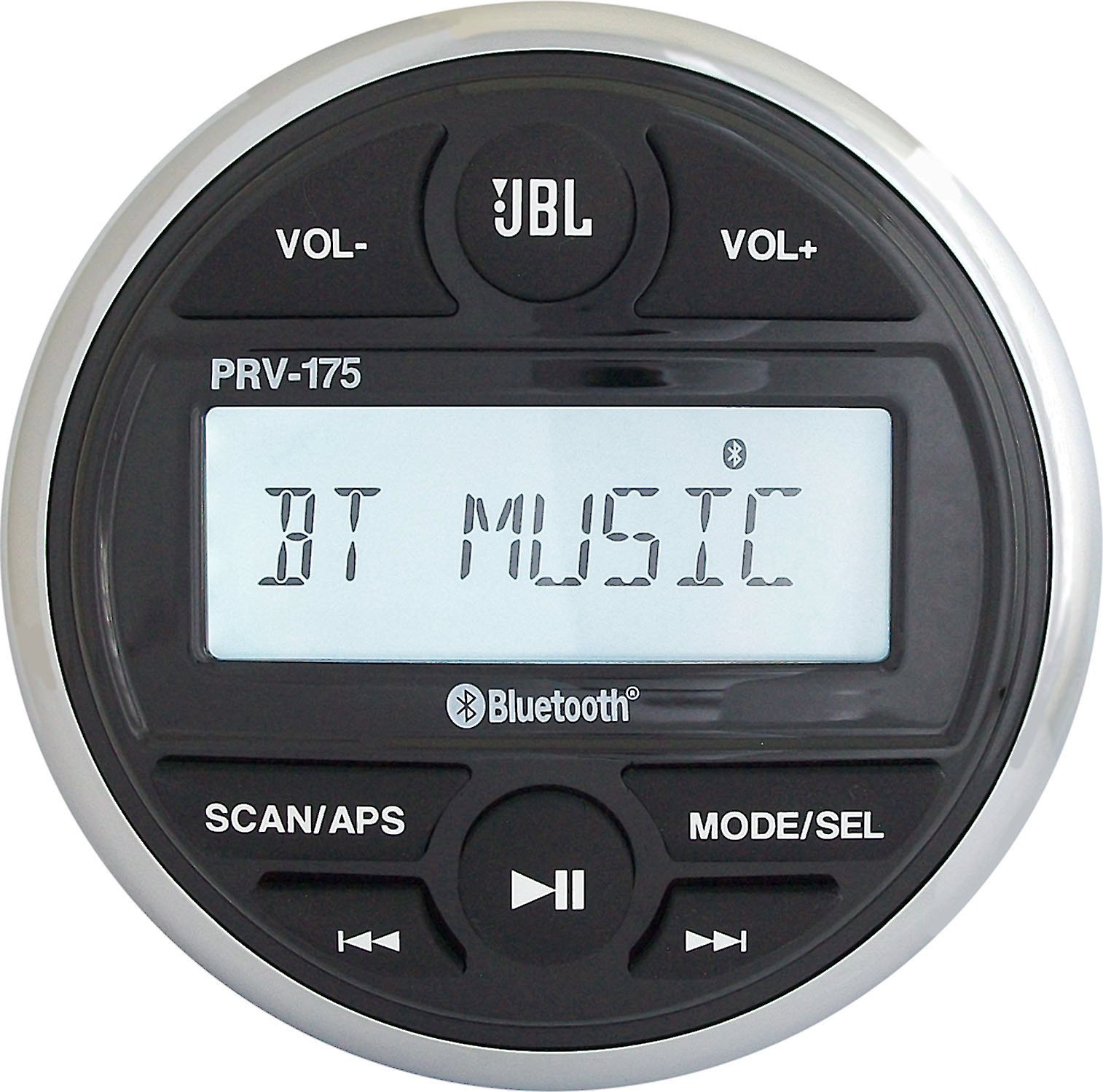 The PRV-175 can fit neatly into a standard tachometer/speedometer opening. It has a set of rear-mounted preamp outputs, so you can upgrade and expand your boat audio system with a marine amp later. If you’re looking for a compact yet powerful receiver, this is the one for you.

The Kenwood KMRM312BT is well-known for its top-tier sound. Although this single din stereo has no CD player, it does have all the other features you need.

The KMRM312BT Marine Stereo has Bluetooth connectivity that lets you listen to music through your phone or make hands-free phone calls while navigating your boat.

It also features front AUX and USB ports to make it accessible and more convenient to use than those with backports.

Compared to most marine stereos, Kenwood KMRM312BT is relatively less expensive price-wise but does not sacrifice the quality of both its parts and the sound it creates.

Its overall build is meant to do everything a stereo system does. With its affordable price and excellent sound quality, the Kenwood KMRM312BT makes its way into our top 5 best marine stereos in 2019 review.

The NOAM NUTV4 is well-known for its distinct backlit Bluetooth remote control which you can use to control both the system and the paired device.

Its remote even has an AUX port where you can plug your device and connect it wirelessly to your speaker stereo system.

The NOAM NUTV4 is the only product in our top 5 best marine stereos in 2019 review that has a remote control this versatile. It’s almost as if the remote control is the stereo itself. 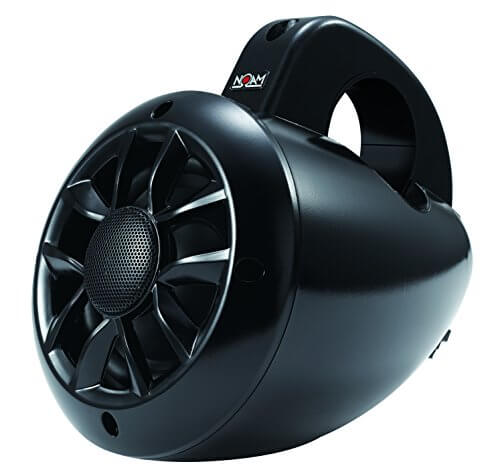 This product’s variety of connectivity options is one reason it made its way into our top 5 best marine stereos in 2019.

It is a single din stereo with various connectivity options such as a front AUX and USB, Bluetooth 3.0, and even NFC. 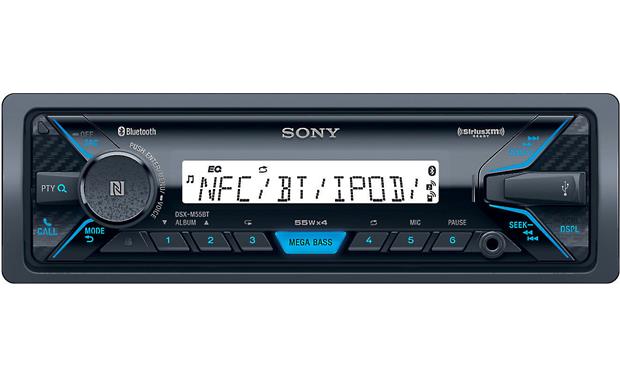 It’s also compatible with the SiriusXM satellite radio tuner, Pandora (iOS and Android), and you may even control it with Siri.

This digital receiver offers multiple options in terms of music. Moreover, since it’s Sony, it has mega bass, which gives optimal boosts to sounds, especially low-end ones. This, paired with its advanced sound engine, guarantees that you’ll hear your music clearly, even in naturally noisy environments.

Unlike car audio components — which live in a safe environment in the interior of your vehicle — marine audio component have to be able to endure harsh outdoor elements. The water, salt, and sun that make your boating so enjoyable can wreak havoc on your boat's audio electrical components. And unless these components are made to endure this sort of abuse, they won't last a season.

Marine certified audio component including speakers and receivers undergo several hours of extensive pre-production tests such as ultraviolet tests to determine how well (or not so well) the component will hold up after years of sun exposure, salt fog test to simulate years of exposure to harsh salt water environments, as well as blasts of water to test and ensure that all the buttons, knobs and ports are water-proof. Additionally, most marine receivers also use an extra layer of special conformal coatings to protect the internal circuitry.

So, when you're shopping for a new marine stereo for your boat, here are a few key things to take into account.

Each boat is built differently. Some boats are quite large and offer plenty of space in the dash or bulkhead, while other smaller boats have a lot less space. Marine audio manufacturers are aware of this, which is why marine receivers come in a variety of shapes, sizes, and configurations. So the question is, which marine stereo type is for you? Let's find out.

Single DIN (2" tall) receivers are the most popular marine receivers on the market. They are designed to perform just like any standard car receiver. The main difference between car single din head units and marine single DIN receivers is that the latter ones are built to resist marine elements.

They feature water-resistant face plates, and special covers for CD openings and/or USB and AUX ports which allows them to stand up to moisture, sunlight, and salt.Single DIN marine receivers will fit neatly into most boats out there (not to mention Jeeps, ATVs, and golf carts…), The thing you want to take into consideration before you order is the depth of the enclosure/opening in which it's going to be mounted in your boat has a shallow opening, then you might want to consider a digital media receiver instead of a regular receiver, that's because digital media receivers (also known as mecheless) have no built-in CD player, therefore, their chassis isn't nearly as deep, so they fit into tighter opening.

In case your boat has no bulkhead or control panel space for a single DIN head unit and you still want it, then you might want to consider a universal waterproof marine housing/bracket which makes it easy to install in the best spot on your boat.

These round digital media receiver have no built-in cd player are specially designed to fit into standard-size (3") openings, so you can enjoy your tunes even if you have very limited space in your boat. And like all marine rated receivers, they're coated and sealed in all the right places, so they'll give you great performance for many years to come.

What sets these "black box" receivers apart from the other marine rated stereos is that these are designed to be installed out of sight. Don't get me wrong, they can give you access to all the functionality and connectivity you'd ever want from a standard marine stereo. The downside, however, is that while these receivers can resist moisture and corrosion, they're not as water-resistant as receivers designed specifically for outdoor and marine use.

What should you look for in a marine stereo?

Aside from the type of the receiver, there are many other technical things you should take into consideration before you buy a marine stereo. Remember that the better the specs of your receiver mean better sound quality. The things to take close attention to are : RMS power, USB ports, a wide frequency response. Additionally, if you like listening to radio that much, then look for FM sensitivity spec — the lower, the better.

Since you'll be listening to your music out in the open and your boat isn't acoustically perfect (as opposed to a vehicle), you'll want your speakers to play louder, therefore, you need to give them enough wattage. Most marine receivers come with built-in 4-way amplifiers. What this means is that they can power 4 speakers simultaneously. If you want your speakers to really sing, consider adding an external amplifier to your boat audio system.

If you are going to build a relatively large boat audio system, it's wise to invest in a marine stereo with multiple sets of preamp outputs. This will save you money down the road if you decide to add external amps and subs. 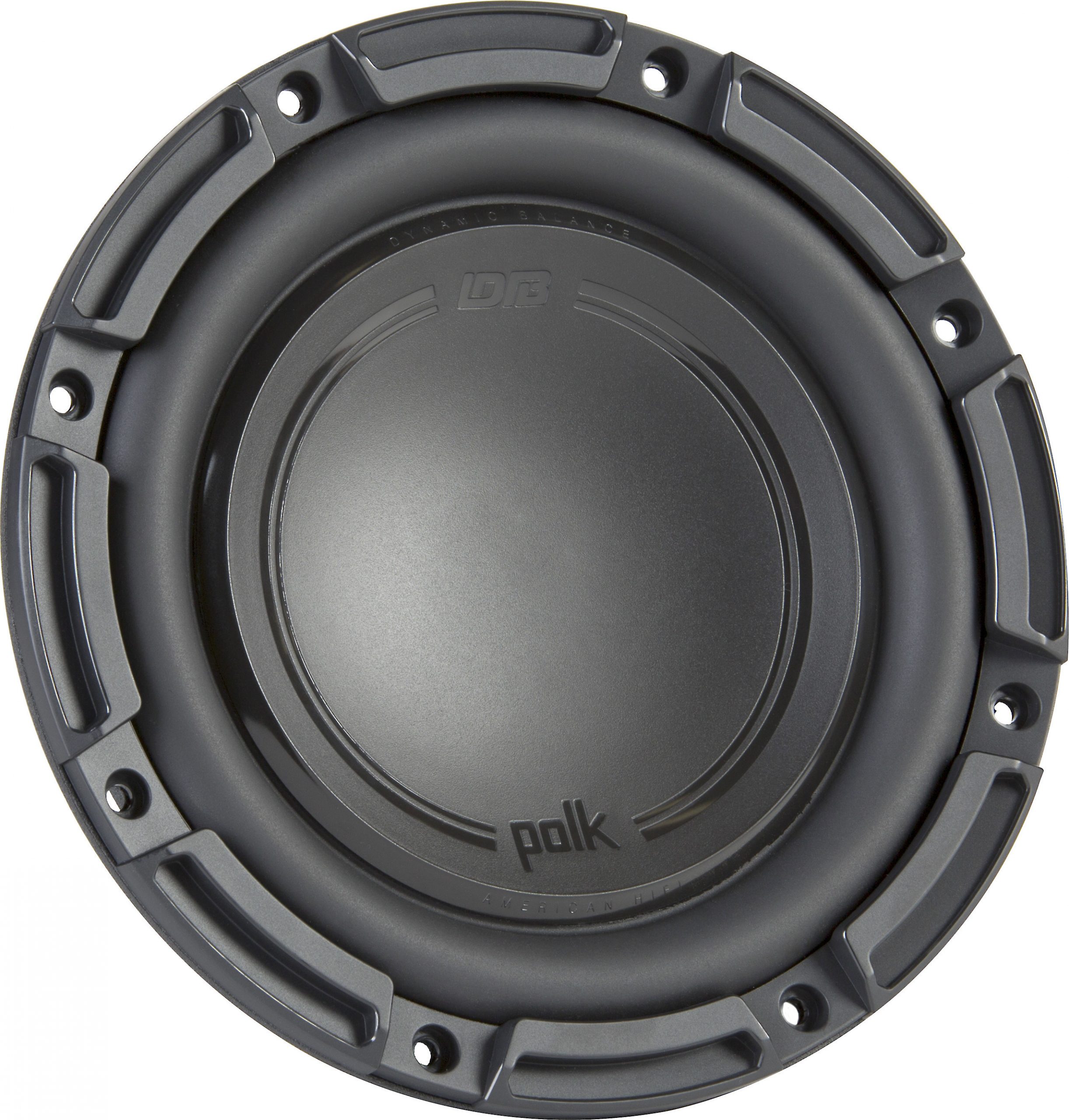 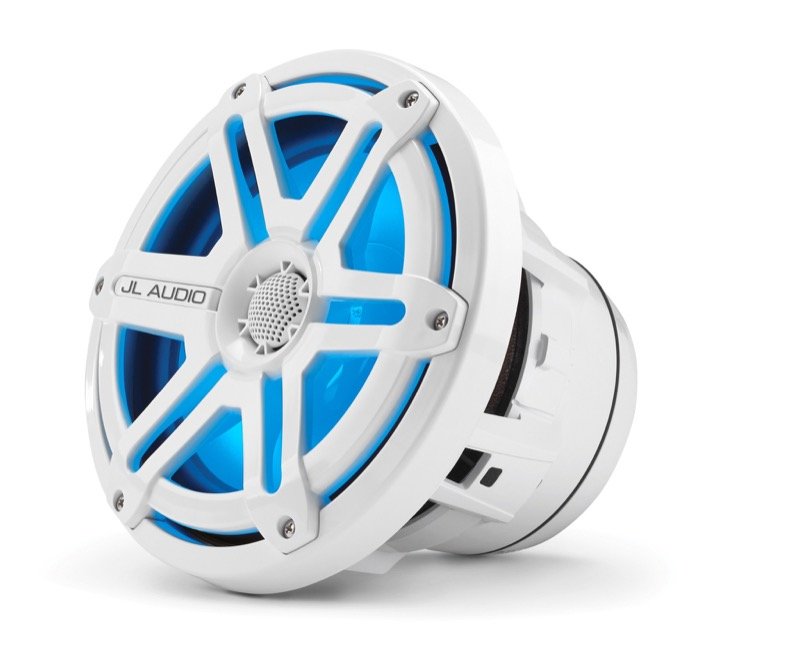 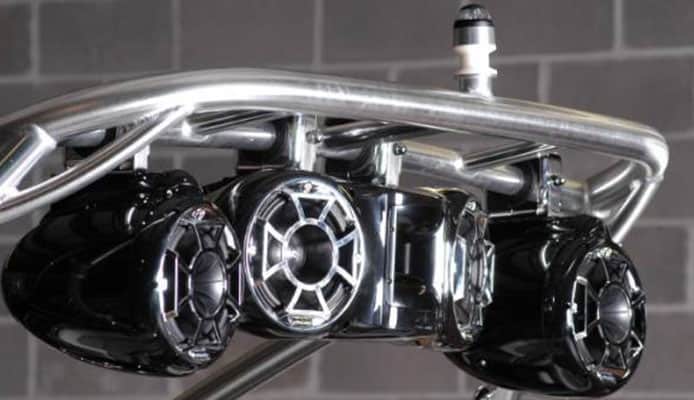