The double-DIN head unit is considered as the best multimedia device to fit inside any car. In fact, most modern cars already have one equipped, either because the manufacturers want to, or local laws require them to.

This increased real estate gives you more control options. Not to mention, a bigger screen makes it easier for you to see the display. This in itself has made backup cameras more practical as well. A lot of Double DIN Car Stereos typically can be setup with a Backup Camera, making it that much easier (and safer) to back out of your driveway.   Below, we’ve rounded up some of the Best Double DIN Stereos with a Backup Camera.

If you’re looking to make your car safer, read on below to find which Car Stereo is best for you!

The Eincar Android 10.0 Car Stereo is a value-packed if a little unknown option for people who want a double-DIN with a backup camera.

As a modern double-DIN car stereo, the Eincar Android 10.0 Car Stereo comes with all of the modern niceties.

This includes Bluetooth 4.0 for hands-free calling and music, Wi-Fi and 4G support, as well as radio connectivity, and a double-satellite GPS navigation system with 3D voice maps for easier navigation and better signals. The 800x480 resolution screen display is amazing to look at, and its performance is more than satisfactory. This is because of the above-average hardware specifications, including but not limited to a Quad-Core 1.6GHz processor and 16GB ROM on top of 2GB RAM.

The double-DIN car stereo is essentially an Android tablet inside your car, albeit one that’s been specifically designed to work seamlessly with your car’s functions.

Just like any tablet, you can install any of the thousands of apps available on Google Play on it. More importantly, it comes with a back-up camera right out of the box that turns on automatically whenever you’re backing up or reversing. 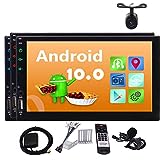 Kenwood is not often associated with reasonably-priced audio products, but the Kenwood DDX26BT is quite the exception.

Packaged along with an HD rear-view camera with a 170-degree wide-angle view, the DDX26BT also comes with a number of useful features. This includes some of the more obvious and expected, like smartphone and Bluetooth connectivity, as well as smartphone connectivity, and a touch-screen display. Uncommon features, on the other hand, include dual-phone connectivity support (with easy one-button switching at that), and a Music Mix feature that lets you pair as many as five phones for music streaming.

The Kenwood DDX26BT Double din car stereo also has a USB input and an A/V input on its rear, as well as parking guide-lines for a more convenient parking experience when using the backup camera.

The Kenwood DDX26BT car stereo also isn’t just ready for satellite radio. It also supports other means of playing audio. This includes popular alternatives such as Spotify, Pandora, and iHeartRadio, among others.

Speaking of radio, the sound quality of the kenwood DDX26BT can help significantly improve the audio quality of your car. This is because of the 13-Band equalizer that lets you tweak the audio further than what other car stereos would let you. It’s also got digital time alignment, as well as drive EQ to make it easier to drive out road noise. 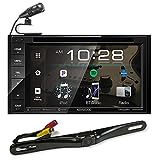 You’ve got to hand it to Boss Audio Systems. The BVB9364RC Car DVD Player packs a lot while costing even less than the conventional double-DIN car stereo.

The BVB9364RC comes equipped with a 6.2-inch LCD touchscreen monitor, as well as Bluetooth connectivity, an AM/FM radio, USB/SD ports, an equalizer and an AUX input, as well as preamp outputs for a subwoofer, rear, and front.

Of course, as expected, it comes with a backup camera right out of the box. Outside of that, the BVB9364RC is pretty standard.

The visual display is pretty average, but if it’s any consolation, the lights are dimmable. The Bluetooth also works well too, although the performance isn’t anything to write home about either. In addition to this, the equalizer is useful and serviceable, while the audio quality is okay. But, if we’re being honest, we did really like how well-written the instructions were.

For its price, the BVB9364RC could very well be the best double-DIN car stereo with a backup camera.

Sure, it’s not perfect, but for most users, it’s enough. 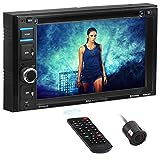 Another noteworthy double-DIN stereo with a backup camera is the ATOTO A6.

The ATOTO A6, much like the others on our list, is Bluetooth-enabled for wireless media streaming and hands-free calling.

In addition to this, the A6 comes with an app known as “EasyConnect”. Using this app, you can link your phone to the screen of the ATOTO A6, either via WiFI or USB connection. In doing so, you’ll be able to mirror the display of your phone onto your car stereo. This allows you to access most if not all of your car’s function without having to hold your phone while driving.

On top of this, the A6 comes with a quick-boot function, which means that it will be ready as soon as you start your car. 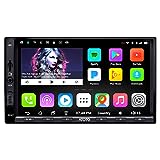 The Hizpo 7-inch Car Audio Video Player isn’t just one of the best double DIN car stereo with backup camera . Sure, its low price plays a factor, but it’s what it does for the price it sells that really puts it on our list.

Installation is easy. It will fit just about any car with a double-DIN slot. But, if you need help, the manufacturer’s technical support team are available 24/7 to help you with your problems.

In addition to this, the Android-based car stereo is updated to work with the latest Android 10 operating system and comes with the hardware to match it. This guarantees a stable and smooth experience, as well as a fast-boot set-up that shouldn’t take longer than a second after starting the car to boot.

Bluetooth functionalities are a given at this point, but it’s GPS navigation support that comes preloaded with US maps that takes the cake here. As a bonus, the map supports voice guidance, as well as 2D and 3D map views, giving it a robust navigation system.

While the back-up camera isn’t the clearest, it’s not bad either.

You’ll see what’s behind you clearly enough regardless of the weather and lighting conditions. Plus, this car stereo supports dual-zone functionality, allowing you to watch videos while playing music. 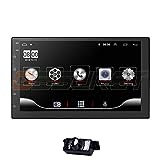 The Best double DIN car stereo with backup camera isn’t the same for everybody. But, at the same time, there are a couple of minimum specifications that you’d want. This includes, of course, a backup camera, Bluetooth functionality, and a GPS navigation system.

Those are things that you can find in our recommendations for the best double DIN car stereo with backup camera.

We made sure that we catered to a wide variety of tastes and preferences in our list, so expect to find something for everyone here.