Not so long ago, shopping for a new in-dash head unit for you vehicle used to revolve around two basic choices: CD or cassette. However, with the technological revolution that has swept through the industry in the last 30 years, things have changed so much.

Nowadays, cassettes are long gone and CDs are heading toward extinction as well.

Now, chances are high you have an iPod or a smartphone filled with music or music apps, and you might not even own CDs anymore.

This technological advancement combined with our fundamental change in how we listen to music has spawned a new category of in-dash car receivers — the digital media receiver.

What is a Digital Media Receiver?

Most car head units also feature SiriusXM satellite radio, Pandora, iHeart radio, and Aha radio as well. With all those source options to choose from, bringing a CD to your car is unnecessary.

Pioneer is one of the best car stereo brands out there. They've been in this industry for quite a long time and have mastered the art of providing top-notch product. They offer a wide range of car audio components including speakers, subs, amplifiers as well as car receivers of different types.

The MVHX560BT is one the best digital media receivers that Pioneer has to offer. This mechless car stereo seem to be well-liked. It's actually one of the best selling mechless car stereos on the market. And that's no coincidence, it's very well-engineered and it packs in a wide array of features for the money.

The MVH-X560BT features a relatively large, multi-line LCD display with enough room for displaying song info, artist name, along with your system settings.

This car receiver lets you set the colors of the display and controls separately, creating over 200k possible combinations to match your dash or your style.

The MVH-X560BT features Bluetooth connectivity for hands-free calling and wireless music streaming. It also lets you enjoy music from your iPhone® or iPod®, select Android™ phones, or a USB thumb drive. So, if you've ditched CDs and you're ready for an all-digital entertainment experience, Pioneer's MVH-X560BT digital media receiver is worth considering.

As for audio features, the MVH-X560BT has a built-in MOSFET amplifier with 14 watts RMS. It also has an advanced sound retriever (ASR) and it's fitted with a 5-band graphic equalizer.

Kenwood is another great car stereo brand with a reputation for quality. They were founded in 1961, and have been making quality product ever since.

Kenwood offers a wide range of car stereos of different types. As for prices, it really boils down to this: the more features you want in your car receiver, the more money you'll have to shell out.

Also, bear in mind that Kenwood double DIN head units with touch screens cost a pretty penny.The KMMB-T315U is Kenwood's newest digital media receiver. It hit the market in late 2015, and it's meant to replace the "KMM-BT312U".

The KMMB-T315U is very well-conceived and well-engineered. It features a 1.5 line LCD display with bright variable-color illumination that can be adjusted to match your dash. Its large volume knob and buttons are intuitively placed for easy access and comfortable use when you're on the road.

If you're an Android user, you'll find the Android Open Accessory protocol (AOA) very useful as it allows you to connect your smartphone to the receiver via the front USB port or through Bluetooth, then control all the music you've stored there.

You'll also be able to run the apps such as Pandora and iHeartRadio Internet radio, and take advantage of a variety of search and playback features.

This mechless head unit also features iPod/iPhone direct connection. And with a compatible iPhone, you can also enjoy the convenience of full Siri® Eyes Free control.

As for sound shaping controls, the KMMB-T315U sports a Drive EQ which can boost specific frequencies in the audio spectrum to overcome the negative impact of that unwanted, extraneous noise. The KMMB-T315U also has 6 EQ curves and 13-band equalizer so you can better fine tune your music to match your taste and listening environment.

The KMMB-T315U is equipped with a built-in MOSFET amplifier which can put out 22 Watts RMS, which is pretty much enough for stock speakers. However, if you've upgraded your speakers to some well-built aftermarket speakers, you'll want to add an external amplifier for optimal results.

All in all, the KMMB-T315U is a great digital media receiver for the buck. I mean less than $100 for all of these features, that's a major bargain. 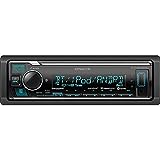 JVC is a brand we haven’t come across very much on our site. Don’t get us wrong. This doesn’t mean by any means that their products aren’t anything to write home about. Quite honestly, JVC produces some great, reasonably-priced car audio component, and the KD-X320BTS car digital media receiver is no exception.

The JVC KD-X320BTS is going to be the most budget-friendly pick of the lot by far. So, if CDs aren’t part of your world any more, and you want a budget mechless head unit with a decent array of features, then JVC KD-X320BTS is a good model to consider.

The JVC KD-X320BTS sports a single-line, easy-to-read display, and has a significantly large knob button in addition to a front USB port and and an auxiliary input.

The downside, however, is that you can’t change the color of the display and buttons. Nevertheless, the KD-X320BTS has separated brightness control for buttons and display.

As with all new head units, the JVC KD-X320BTS feature Bluetooth connectivity for hands-free calling and wireless music streaming. conveniences that’ll make your driving time a bit more easier. Additionally, if you’re a satellite radio fan, you can add a SiriusXM tuner to this JVC so you can enjoy the wide variety of music, sports, news, and entertainment available on SiriusXM.

As for the cons, it’s quite difficult to think of any. If anything, I’d say that it’s a shame you can’t change the display and button colors of this head unit. 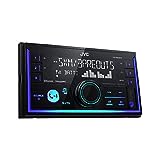 The DSX-A400BT is another great, new mechless head unit from Sony. It features a sleek, straight-forward design with an easy to use buttons and easy to read single-line LCD display.

It features built-in Bluetooth® connectivity for hands-free calling and wireless music streaming, as well as several other options for enjoying your digital music stored on your smartphone, portable music player, or flash drive.

If you're a tweaker listener who likes to fiddle with the EQ settings to hit that musical sweet spot, you'll be happy to know that this headunit is fitted with a 5-band equalizer.

It also has a great built-in amplifier which can put out 18 watts RMS. And if you're thinking about dropping an external amplifier into the mix, you'll find two sets of 2-volt preamp outputs on the back panel.

Are you looking for a mechless car stereo with a touch screen that can still fit in your dash despite it not being designed to accomodate large touch screen stereo? Well, your search ends right here because "Power Acoustik" has got you covered with a single DIN digital media receiver which has a nice 7-Inch LCD touch screen. You may be asking, "How is that possible"?

Our major complaint about this digital media receiver is that it doesn't come with many audio shaping controls. So, if you're a tweaker listener, I'm afraid this headunit is going to be a bad option for you unless you're going to add an external car audio equalizer. Additionally, it doesn't pack in many other features as the other head unit we've come across. Simply put, its very basic. Still, the Power Acoustik PDR-780 is a great deal for the buck.

This is going to be the most expensive pick of the lot by far. The Sony XAV-V630BT is a double DIN digital media receiver with a 6.2" LCD touch screen display. It's designed to fit double-DIN (4" tall) dash openings.

The Sony XAV-V630BT is a smartphone friendly digital media receivers. With its Bluetooth connectivity, you can carry on your conversation without taking your hands off the steering wheel. You can also stream music wirelessely from any Blueooth enabled devices.

If you're into Pandora, you can pair your smartphone device (be it an Android or an iPhone) to the XAV-V630BT and enjoy your playists; or you can use Sony's SongPal app which is a mobile application dedicated for Sony head units.

It allows you to control your receiver's settings from your phone, which you can also do if your iPhone® has Siri Eyes Free functionality.

This double DIN digital media receiver is fitted with a powerful built-in amplifier rated for 17 watts RMS. It also has a 5-band equalizer so you can fine tune your music for a great in-car listening experience. Combine that with Sony's MEGA BASS circuitry which gives punchy bass sound and your head unit is set to rock.

Our only complaint about this double DIN digital media receiver is the price. This thing is pricier than most single din head units we've come across.

How to Choose the Best Digital Media Receiver

In order to make an informed buying decision, as yourself the following questions :

What type of inputs do I need?

Answering this question is the next step in selecting the right car digital media receiver. Today's mechless head units comes with various audio sources. Here's a quick rundown of what to look for.

Are you a tweaker or a set up and play listener?

Besides listening options, internal power and preamp sound processing are also to be considered when you're shopping for a new digital media receiver, especially if you're a tweaker listener. So why sound controls are very important?

Simply put, sound controls let you tailor the music to your car's acoustics. If you're not a tweaker listener, having  treble, bass, and midrange controls is usually more than enough. However, if you're a serious audio enthusiast who likes to experiment with advanced sound adjustments, then consider a mechless car stereo equipped with a sophisticated equalizer (such as a parametric EQ), with digital signal processing chip (DSP), and with digital time correction — these types of sound controls give you total control over the effect of the acoustics in your vehicle.

What else should you consider in a mechless head unit?

In addition to sound controls and inputs, here's a rundown of the other features you might want to consider when you're shopping for a new digital media receiver.