What is the Best Car Audio Battery for Optimal Performance

Normally, your car wouldn’t need anything more than the battery that it comes equipped with. However, by installing an aftermarket audio system that’s more powerful than stock, your car’s battery might no longer be enough! In a worst-case scenario, you might find yourself with a fully drained battery in the middle of the road.

Luckily, you won’t have to suffer from this if you do things right.

One way of making sure of this is to install the Best Car Audio Battery for optimal performance of your vehicle. In this guide, we take a look at some of the best ones out there! Take a look! 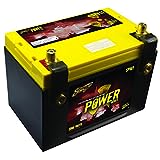 What Are the Benefits of Having a Best Car Audio Battery?

Your car’s battery is powerful, but it’s not nearly powerful enough to provide the extra power needed for aftermarket audio systems. It should be able to power such a system for a while, but you run the risk of having a drained battery for doing so. Because of this, it’s recommended to have a second battery installed.

Having a dedicated car audio battery will allow your aftermarket car stereo system to run at its optical performance without putting you at risk of a drained battery or affecting your car’s overall performance.

No worries about listening to music while parked

Anyone who’s ever made the mistake of listening to music for hours while parked will tell you that it can fully drain your car’s battery if you’re not careful. But, if you have a dedicated car audio battery, you can listen to music for as long as you want, even when you’re parked and not doing anything else.

It’s a cheaper alternative to capacitors

Installing capacitors is another way of providing power for an aftermarket car audio system. However, they’re expensive to install. They also take up a lot more space than a spare audio battery.

There are three main types of best car audio battery used these days.

The first is the wet lead-acid battery, which is the cheapest and most common option. This type of battery also requires regular maintenance as you’ll have to top it off with distilled water. Otherwise, the battery will end up suffering damage. This type of battery is also prone to spillage, which is why, despite its popularity, a growing number of people are starting to consider other options.

The second type of car audio battery is the gel-cell battery, which uses an electrolyte gel. Gel-cell batteries are considered safer compared to lead-acid batteries. This is because they are designed to be sealed and maintenance-free. The gel itself is also resistant to the constant vibration caused by the car running.

The third and last type of car audio battery is the AGM battery.

What Features to Consider in a Car Audio Battery

There are three main factors to consider when shopping for the best car audio battery for optical performance. This includes its power rating, battery life, and environmental protection.

The power rating is pretty self-explanatory. You’ll have to choose a car audio battery that’s capable of powering your entire stereo system. Keywords to watch out for include amperage, amp-hours, and cold-cranking amps.

There are several factors that affect how long a car audio battery can last. This includes how often it is used, how you charge it, as well as the kind of temperatures that it is subjected to often. But, as a general rule of thumb, the larger the battery bank, the better.

Shock and vibration protection should be a given. The ideal car audio battery should have both. Heat and cold proofing, as well as water-resistance or water-proofing, are also huge pluses for an extended lifespan. 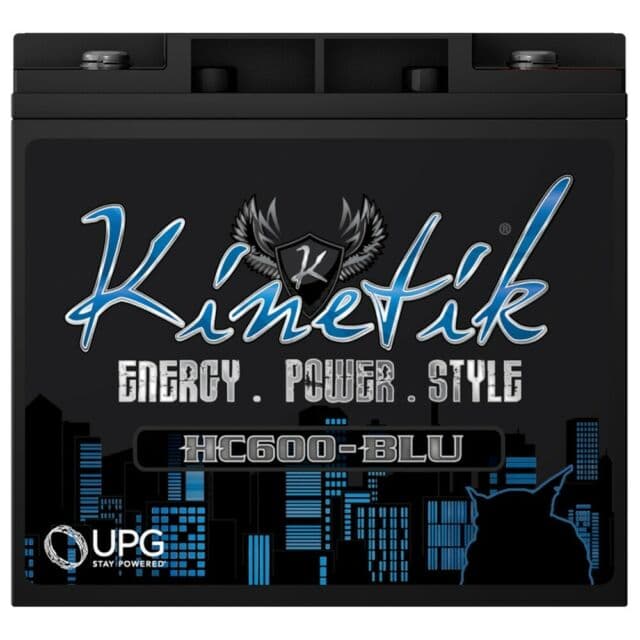 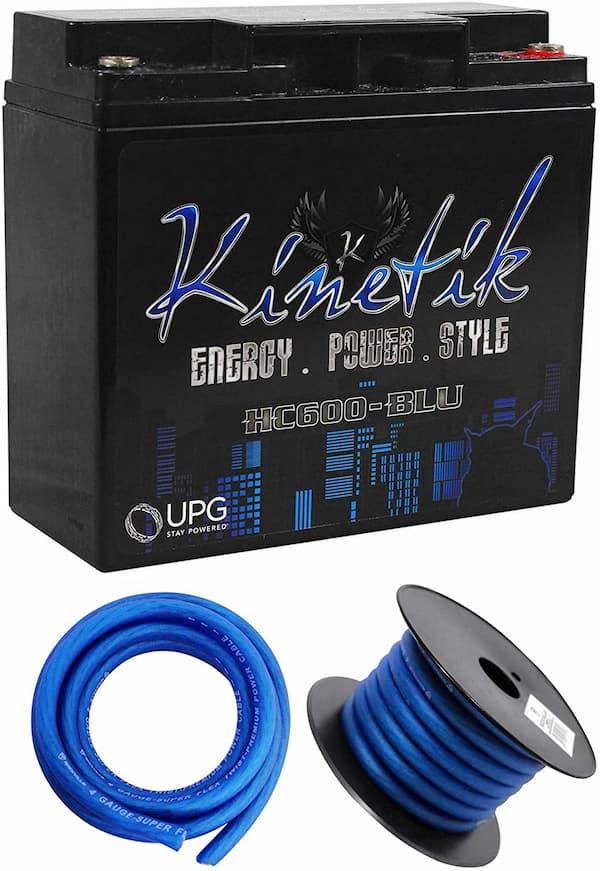 Affordable and best don’t always go together, but it sure does with the Kinetik HC600 BLU AGM Power Cell!

The ideal car audio battery for systems that don’t require more than 600W of power, the HC600 is perfect for budget-conscious buyers. However, despite its relatively low asking price, the HC600 BLU AGM is far from cheap. In fact, it’s vibration-resistant and resistant to heat with a high-current power output, as well as a lightweight design.

For a dedicated car audio battery, the Kinetik HC600 is as low as we can recommend price-wise. 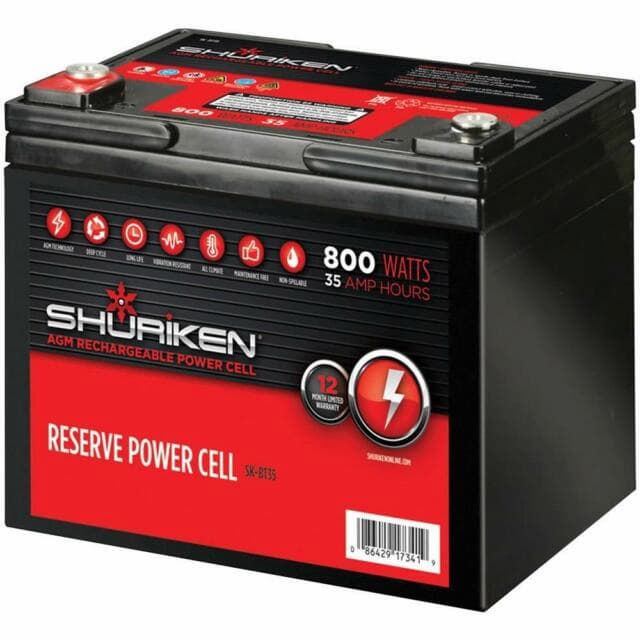 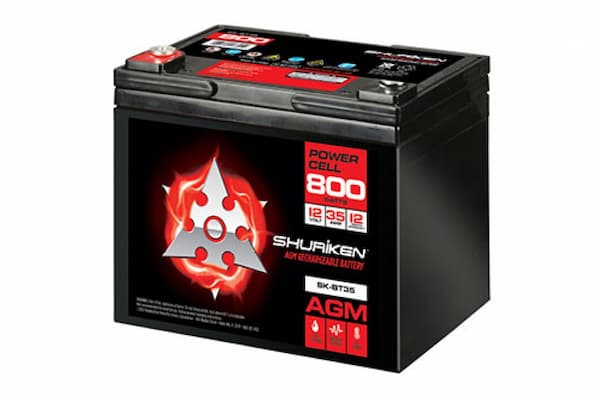 The Shuriken SK-BT35 is another affordable alternative for people looking for a reliable car audio battery. A high-performance AGM battery, the SK-BT35 can power a car sound system with a maximum power draw of 800 watts. It’s also relatively easy to mount, has a leak-proof design, and housed inside an ABS plastic that’s been reinforced to make sure that it can withstand extreme temperatures, as well as vibration.

What makes the Shuriken SK-BT35 unique is that it’s capable of powering 800-watt stereo systems despite its small stature. It’s arguably the smallest car audio battery on our list, and it’s lightweight as well. Not to mention, you can even use it as a substitute to your car’s battery in a pinch, which is great in case your main battery fails while you’re out on the road. 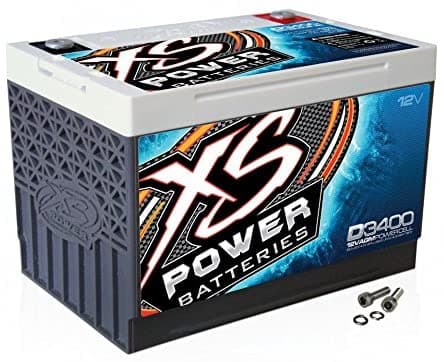 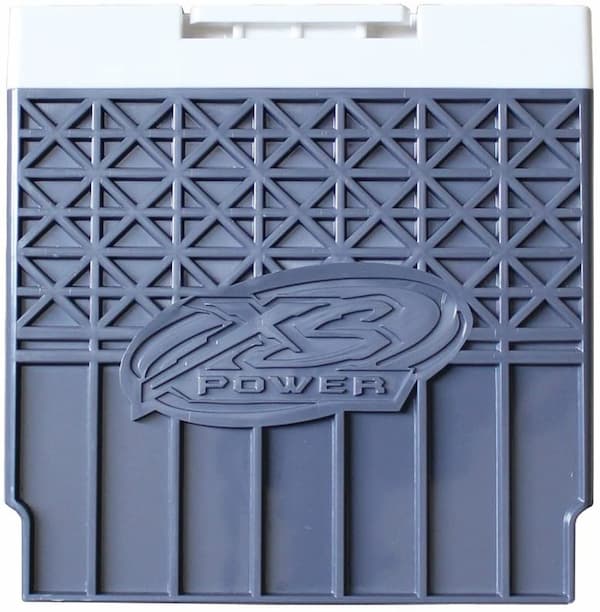 Users looking for a high-performance car battery that can power their amped up car stereo system need not look further than what the XS Power D3400 has to offer.

More than capable of replacing your car’s regular battery, the D3400 can power audio systems that need as much as 3,500W of power. Yes, you read that right. It’s 3,500W, and it comes with a three-year warranty that pretty much guarantees that it will last up until your next upgrade.

The XS Power D3400 also uses a closed-cell design that makes it spill-free and maintenance-free. Lastly, the D3400 is enclosed in ABS plastic for added resistance to heat, vibrations, and it’s designed to be mounted pretty much anywhere you want to mount it. The only downside to the D3400 is that it is expensive and heavy.

The Optima Batteries D34/78 is another car audio battery that’s built for high-performing audio systems. But, more importantly, it’s also built to withstand the vibrations that these stereo systems usually come with.

In fact, the D34/78 is specified to be able to handle 15 times the vibration of a typical car battery. The Optima Batteries D34/78 can be mounted in any position and has up to 120 minutes of reserve power. However, you likely won’t be needing it as much as it is easy and fast to recharge.

What makes the D34/78 worthy of the “best car audio battery” tag is its low self-discharge rate. Unlike your typical car audio battery, the D34/78 won’t lose its charge even after months of inactivity. This makes it ideal for use in vehicles that are usually kept inside the garage unless it’s a special occasion, or during winter months. 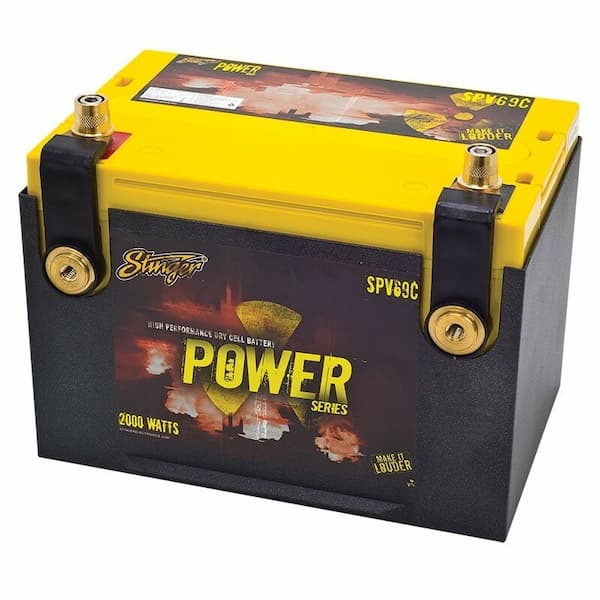 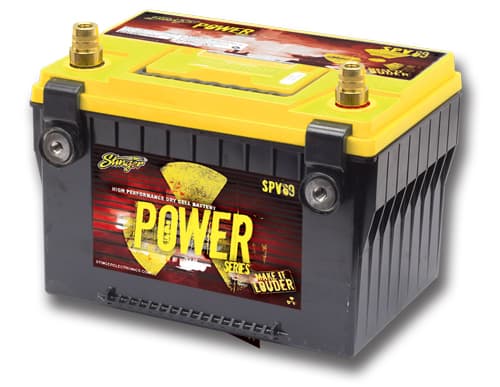 Most top-performing car batteries are a bit on the heavy side. The Stinger SPV69C is not.

A top-performing dry-cell battery, the Stinger SPV69C 1100 AMP uses a sealed AGM design and is relatively portable compared to other types of car audio battery. Also, it’s built with high-quality materials to be able to withstand extreme heat and vibrations, among other things.

Lastly, not only is the SPV69C leak-proof, but it’s also non-hazardous. So, there’s very little risk to using the SPV69C inside your car to power your souped-up car audio system.

Before going out to buy the best car audio battery for optimal performance, there are a couple of things that you have to remember first.

For starters, make sure that you minimize any chances of spillage inside your car’s cabin. Otherwise, dangerous  battery chemicals might leak and become a fire hazard. Not only that, but you also have to make sure that the car audio battery is capable of powering your upgraded radio system. Otherwise, it’ll be a useless investment.

6 Best Powered and Passive Bass Tubes Subwoofer for Your Car 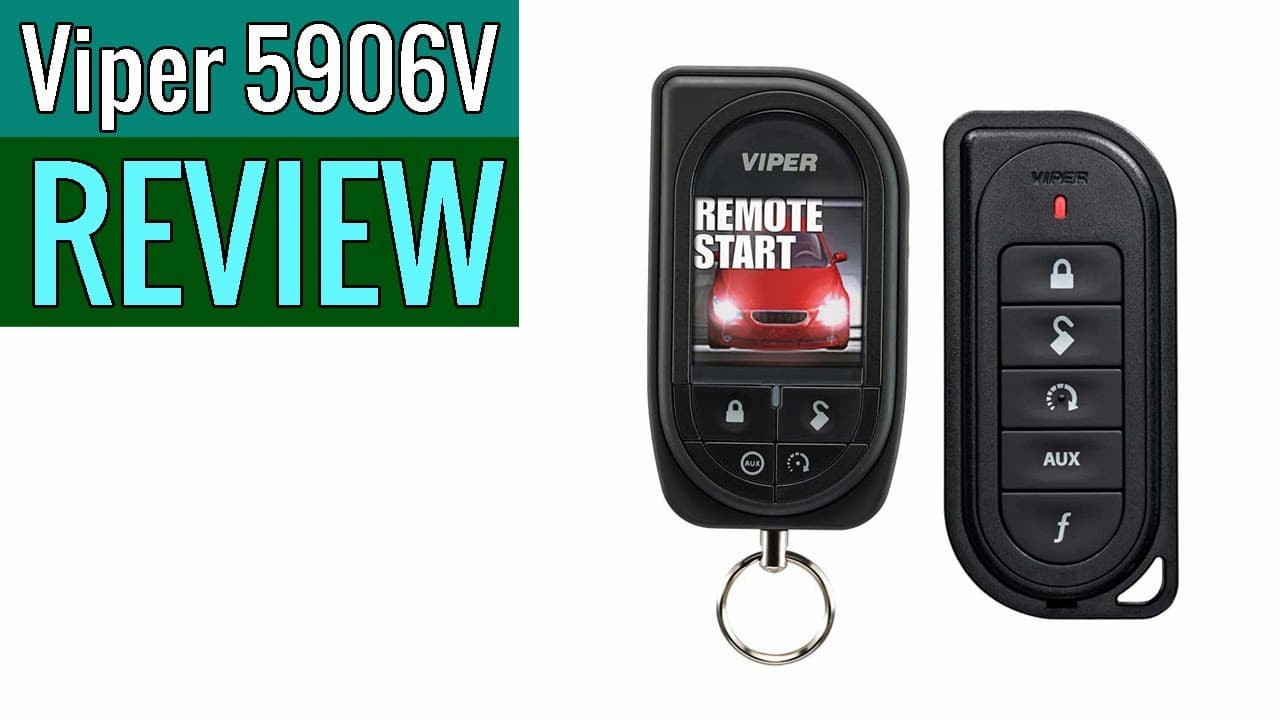 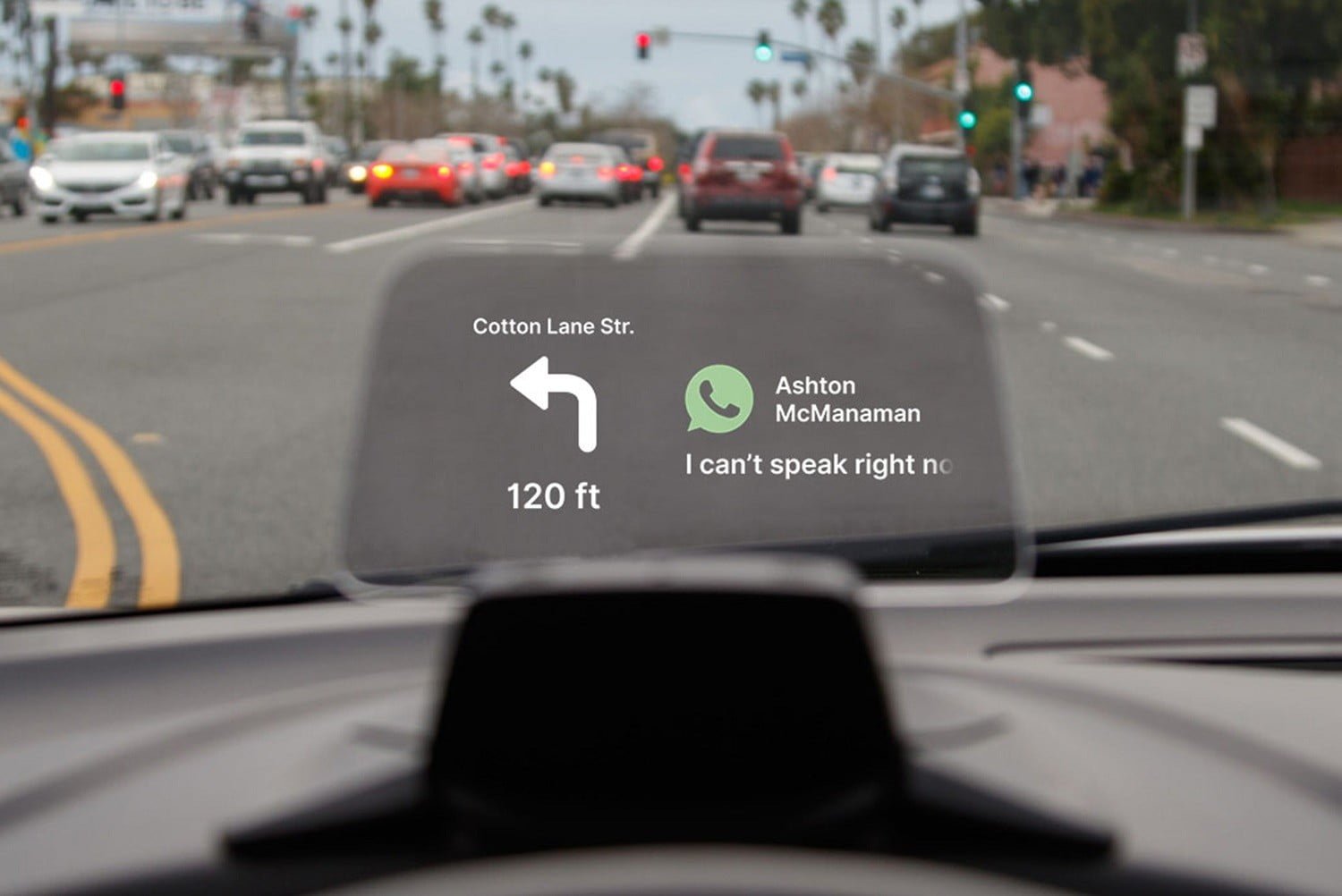 What is the Best Heads Up Display For Your Car? 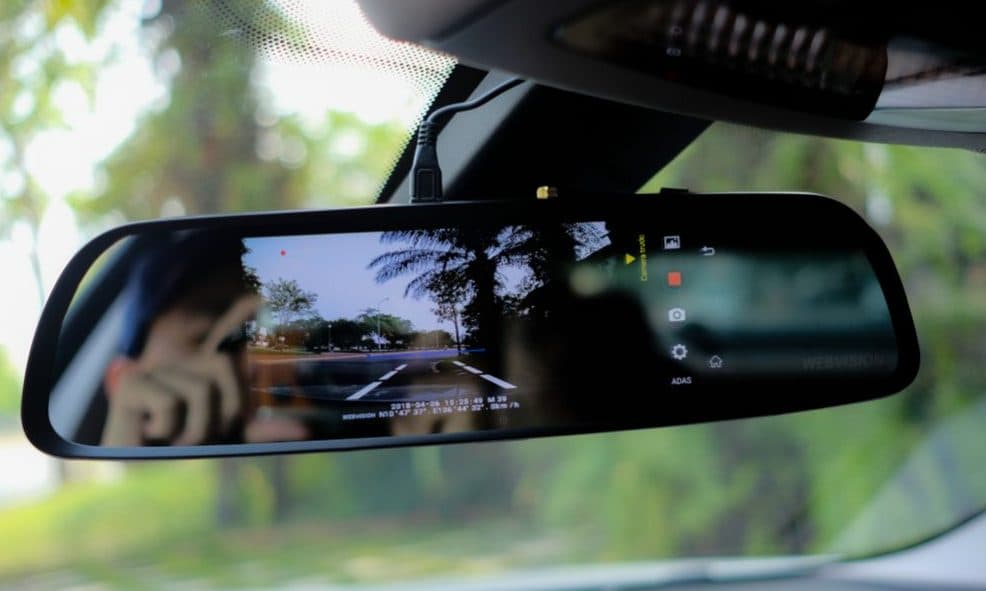