This was a tough one! We had some heated debates as to what car stereo brands should make this lineup, and we're sure you will have some with your friends, too.

Coming up with a list of the best car stereo brands isn't an easy task as there are so many great ones out there. Trying to put something like this together seems to me like asking a mother which one of her kids she loves the most. However, we did it anyway.

This is not by any means a comprehensive list. There are tons and tons of great car stereo brands out there. However, we did want to give you a few good options. These are the 5 best car stereo brands that captured the hearts and minds of serious car audio nuts everywhere.

These brands represent different price points, designs and shapes. With any luck, you'll find something that meets your needs and fits your vehicle.

If we missed an aftermarket car stereo brand you like, let us know in the comments.

When it comes to car stereos, Pioneer is one of the most legendary. They've been around for a very long time. They offer everything from speakers and subwoofers to amps and car stereos of different types. We've had the opportunity to try various pioneer car stereos including single and double din head units, and truth be said, Pioneer makes quality, top-notch car stereos.

Pioneer offers a wide range of car stereos of different types. So, whether you're looking for a single, a double DIN or a touch screen car stereo, Pioneer has got you covered. Their car stereos range from $100 to $500 depending on which model you choose.

The DEH-80PRS is one of Pioneer's best single DIN head units. It's also one of their most expensive car stereos, and assuming you've got the cash to throw around, it's one of the highest quality car stereos you can buy.Obviously, the DEH-80PRS is pricey, and if you want to go balls-to-the-wall and buy one of these, you'll be need to shell out some serious cash.

Pioneer offers plenty of good car stereos with a huge array of features, but if you are a serious audiophile and your sights are set on achieving ultimate sound quality, you need to look beneath the surface for a car stereo that's built from the ground up with sound quality in mind.

First of all, the DEH-80PRS features a futuristic, uncluttered design. It has a crisp 3-line full-dot LCD display that you can customize by choosing from over 200k colors. This receiver's design keeps up with its performance.

In addition to CD playback, the DEH-80PRS is ready to handle your digital media.It also has built in iPod control, dual USB inputs, 6-channel preamp outputs as well as an SD card slot. Not to mention Bluetooth connectivity for the safety and convenience of hands-free calling and wireless music streaming.

Quite honestly, the AVH-310EX isn't even close to the most expensive touch screen car multimedia receivers we've seen.

The AVH-310EX is not the flagship to Pioneer's EX series of multimedia head units; it's technically the entry-level model. It boasts a decent array of built-in features compared to its predecessor counterparts, and its AVIC-prefixed siblings, most obviously being its lack of onboard GPS hardware and navigation software.

However, in many ways, the 310EX's more conservative approach to its feature list that makes it the best buy in the line.

Kenwood is another recognized contender in our lineup of the best aftermarket car stereo brands. Kenwood is a Japanese company founded in 1946. They manufacture and market wide range of car audio equipment including car speakers, subwoofers, amplifiers, and head units.

We've reviewed various Kenwood product on this site before, particularly speakers and subwoofers. However, that doesn't mean that Kenwood head units aren't anything to write home about. To the contrary, Kenwood makes some of the best car stereos in the market.

Kenwood has a long tradition of making quality product for a reasonable price. Their car stereos - particularly single DIN head units - are reasonably priced compared to other competing models. However, they don't forfeit quality for price. Kenwood touch screen car stereos on the other hand cost a pretty penny as they present a rich blend of features and technologies.

The KDC-BT565U is one of Kenwood's best single DIN head units. It's the flagship to Kenwood's KDC series of single DIN car stereos; it boasts a huge array of features. And if you believe in "you get what you pay for", the KDC-BT565U proves that axiom right.

The KDC-BT565U features a detachable face with 13-digit LCD display and variable-color for customizable illumination.

It comes with various smartphone-friendly features and technologies that match today’s on-the-go consumer lifestyle, including Bluetooth for hands-free calling and audio streaming, Pandora, and iHeartRadio Internet radio control with iPhone and Android.

The KDC-BT565U also features dual phone connection for simultaneous pairing of two phones, which is a very convenient option for vehicles with multiple drivers.

The KDC-BT565U is fitted with a built-in MOSFET amplifier capable of outputting 22 watts on continuous basis (RMS). As with many high-end car stereos, the KDC-bt565u sports numerous sound controls including 13-band graphic equalizer with Drive EQ, bass boost and loudness controls, as well as subwoofer low-pass filter, phase, and level controls.

As for Expandability options, the KDC-BT565U has 6-channel pre-amp outputs, front-panel auxiliary input and USB port with sliding covers. It's also compatible with SiriusXM tuner.

If I had to pick some criticisms for the KDC-BT565U, it would be just the price. Something this good is naturally expensive. That said, if you're on tight budget, you don't have to feel left out because Kenwood offers several cheap car stereos.

The DDX373BT is one of Kenwood's newest multimedia receivers. It hit the market in late 2015. It's one of the best touch screen car stereos under $300. It's designed to fit double-DIN dash openings.

The DDX373BT can play all your CDs, DVDs, and recordable discs.

You can also plug a USB drive into the receiver's USB input. This head units is also SiriusXM ready. So, if you're tired of listening to the Radio, add a SiriusXM tuner to this receiver and you'll be able to listen to your favorite stations wherever you are. 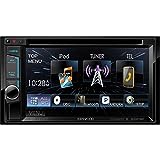 Clarion is a brand we haven't come across very much at all, but we were quite impressed when we did. Clarion's legacy stretches back for more than 7 decades. They've mastered the art of providing quality a product.

One of the major drawbacks to Clarion car stereos is their hefty price tag. Their car stereos are a little on the expensive side.

So, the question we want to answer is : For people for have access to dozens of car stereos from just as many brands ,are Clarion car head units worth the price? Let’s find out.

The CZ505 is Clarion's newest single DIN head unit. It features an all-new sleek, futuristic design and comes loaded with a huge set of features. The CZ505 is very well-conceived. It's uses high quality materials to create a sharp, high-tech appearance while maintaining ease of use.

So, if you're looking for a single DIN CD receiver with simple, easy to use controls, great power output, and a bunch of audio features, Clarion's CZ505  is a great option worth considering.

It comes with a built-in HD Radio® tuner, Bluetooth® with aptX®, satellite radio capability, Pandora® controls, and front USB and aux inputs. You can also customize the look to match you car's dashboard by choosing from over 700 colors for the display and button illumination.

The only downside we can reasonably think of is the price. Clarion car stereos are (and always have been) pricey which makes them way out of the price range for most people.

The NX605 is one of Clarion's best touch screen car stereos. It's another expensive one. This DVD/CD receiver is designed to fit into double-DIN (4" tall) dash openings. It features 6.2" touchscreen and is fitted with several smartphone-friendly features that will keep you entertained and connected.

If you need to keep in touch with the world outside your car while you're driving, the Clarion NX605 navigation receiver's got you covered.

It support both Android and Iphone smartphones and it's fitted with Clarion's Smart Access app to give you access to various info and entertainment services in the cloud such as social media, traffic by INRIX and Waze for both Android and iPhone users so you can check out the road ahead, weather, Internet radio, email...etc.

The NX605 also uses advanced voice recognition to let you compose a text without typing, find nearby locales and places just by speaking, or even read incoming texts aloud, saving you time and allowing you to keep your hands on the wheel.