Are you looking for a budget-friendly mechless car stereo that has Bluetooth support and grants you access to music streaming services like Pandora Music? Well, say no more.


The Alpine UTE-73BT Single DIN Bluetooth Receiver is an excellent product that checks all of the right boxes. Of course, it’s not perfect. But, as you’ll soon find out, it raises far fewer red flags than the amount of solid features it presents its users!

Check out why the Alpine UTE-73BT Single DIN Bluetooth Receiver Product has gotten such great reviews!

The one-line RGB illumination (you can choose the color) of the LCD display stands out from your dashboard in a good way. More importantly, the display has up to five times more contrast compared to its competition. This means that the display is easy to read even when you’re driving under bright sunlight without tinted car windows. 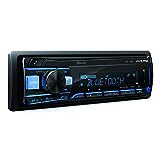 The Alpine UTE-73BT sports the company’s signature rotary knob that makes controlling all the functions of the Bluetooth receiver so convenient. Also, speaking of convenience, the unit comes with what’s known as a front panel auxiliary input.

What this basically does is that it lets you and/or your passenger source your music from any portable media player plugged in.

For the price, the sound quality that you get from the UTE-73BT is hard to beat. The 24-Bit DAC helps make the sound of everything you’ve plugged in better. Plus, it arms you with a 3-band parametric EQ and a high pass/low pass crossover so you can do some fine-tuning yourself to make the sound blasting from your speakers even better.

As a bonus, the UTE-73BT can also play Free Lossless Audio Codec (FLAC) viles via USB for high-fidelity music.

Have you ever bothered taking a look at what would happen if you got caught using your phone while driving?

The consequences, by law, would’ve been devastating. Even more devastating would be the potential disaster that could be the result of you driving on the road while distracting and busy on your phone. But, you can help make sure that you’re not the cause of a minor or major road accident by using the UTE-73BT.

This single-DIN head unit comes with Bluetooth wireless technology so you can attend to your phone calls, whether it’s taking or making calls or putting them waiting, without ever having to take your eyes off of the road.

Alpine UTE-73BT Comes With Its Own Microphone

Alpine really thought of the little things with the UTE-73BT. Not only does it have Bluetooth functionality, it even comes with a tuned microphone. The said microphone was even engineered to minimize background noise and feedback so that you can be heard by whoever is on the other line of the call.

Speaking of being heard, you can also adjust the mic gain, phone output, as well as the ringtone volume of the UTE-73BT.

Alpine UTE-73BT Supports Pandora for Both iOS and Android Devices

It doesn’t matter if you have an iOS mobile device or an Android smartphone, this single DIN Bluetooth receiver works either way. The UTE-73BT will give you full control of Pandora whether you stream it via Bluetooth from your phone or connect your phone via the receiver’s conveniently-placed USB port.

The face plate even comes with dedicated thumbs up/down buttons, as well as Quick Search features, that makes using it even more convenient.

Is Alpine UTE-73BT Worth the Money?

That depends. On one hand, the Alpine UTE-73BT might be affordable, but it’s not cheap. There are double DIN Bluetooth receivers with larger displays and touch screen support that cost less. But, on the other hand, they’re not usually made by known manufacturers, and there are very few companies that anyone would be willing to trust more than Alpine.

So, if you want a sure thing, then go ahead and be our guest!

The Alpine UTE-73BT is an ideal upgrade to aging vehicles that don’t have Bluetooth functionality and don’t necessarily need a double DIN Bluetooth receiver with a larger screen.

As a bonus, it might improve your vehicle’s sound quality and, at the same time, allow you to talk to other people on the phone without having to hold your phone on one hand and adjust the clarity of your voice according to your liking.

If you’re not into CDs, which most people aren’t, and you want your car to support more modern functions without necessarily splurging, the Alpine UTE-73BT holds plenty of value at an attractive price point.

Everything, from the Bluetooth functionality, as well as the design of the unit itself and how it improves your voice and sound quality, all come together to create a worthy upgrade to stock head units for many aging vehicles.